What I learned from Deploy V

It has always been complicated for me, as a project leader of an Odoo implementation and in a certain way also as a final client, to be certain that I am testing functionality as it will be used by the client in production once it is approved by the client. It sounds strange, but it is SUPER complicated to conjugate in the same environment: the actual updated data of the client, the configurations agreed upon at the moment and the latest changes in the code, especially if we take into account that in the same day it can happen (and several times!) that:

The problem is old and known, but we at Vauxoo managed to find something that would have improved this scenario for everyone in general: the project leader, the consultants/developers, the final client, the  sysadmin  and others who need context that is truly READY.

First of all, the best way to understand something is to ask yourself the key question whose solution is what you end up learning; something like start programming the test before the functionality. In this case, my question was:

The answer is not simple, but as Jack the Ripper would say, we go by parts. This image is the main visual for the understanding of this.

we have four environments or instances:

The name already tells it

The Instance of Updates a pre-production is an instance that is updated every time it is approved. One Merge in any of the repositories that compose and not yet passed production. If for example in the addons- vauxoo repository in the main branch 11.0 the merge request #de2ad24 is approved we can see the Update instance with the following information: 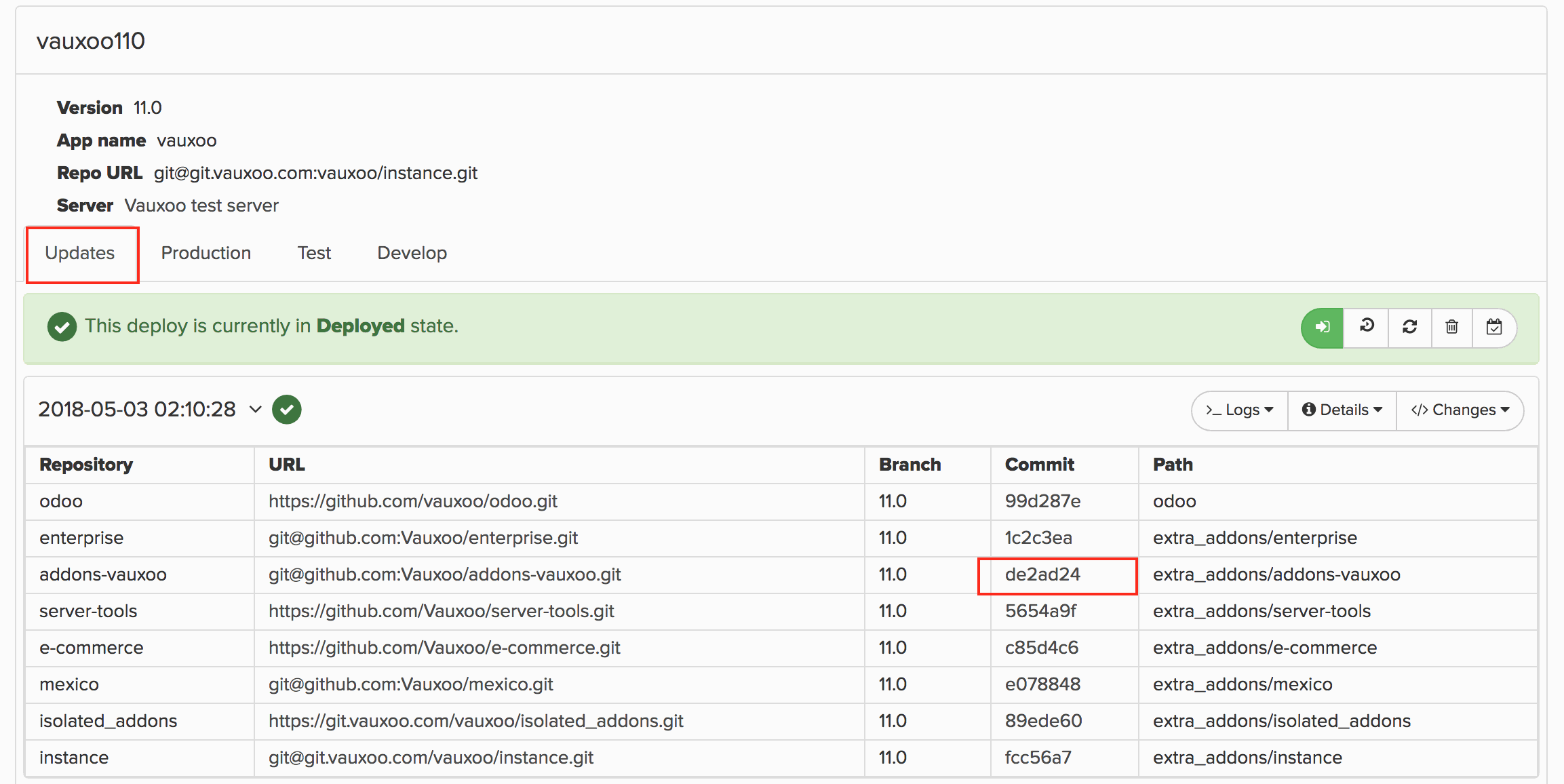 What does this mean? It means that now the changes in that commit can be tested in that instance if you want.
But what happened with the settings you had in that instance? They are lost.
And when do I see Changes in Production? From Updates, you ask for the pass to Production in the Schedule button. Configurations that you have made are not passed, they only pass changes at the code level.

What if I want to test the changes before going into production? The essence of Updates is really that. If we want to test the code changes in the closest way to a possible Production instance then we do a Regenerate to the instance in such a way to load a newer database (the most recent production backup) without changing the commits. This way we are surer of knowing if something broke functionally.

Be careful what you test

Do you remember that I said that in Updates you have to expressly request the pass to Production? Well, that means that in Test you will have the latest version of the code only if you passed to Production what exists in Updates. In a drawing it would be:

What happens with the configurations that I had made in Test after regenerating the instance? They get lost, The Test instance is a copy of what you had in Production.

What is the test instance for? You can use it to test configurations, server actions, etc., that after being fruitful you must do in Production.

What configuration will I have in Test when regenerating the instance? You are going to have the last support made of Production. If you require something more current, you expressly request that a backup is made at that time to Sysadmin.

And what is the difference between "regenerate" and "update"?

The Regenerate builds the instance again and loads a recent database. If the image is built direct from gitlab it only pulls it. The Update only pulls the repos (there is no rebuilding process) or puts the commits that you specify and updates the database (-u all, it does not load a new database). It is rather to test changes quickly before Regenerate.

cons in the lists of instancess

The Alpha and the Omega

And when the Sysadmin generates a new instance of Production what happens? Sysadmin not touch the configuration, it only displays the changes at the code level or executes scripts. Once Production is ready and a backup is generated with that configuration, you will have the possibility to generate a copy in Test or Updates and be able to follow your tests with the last thing that was agreed. 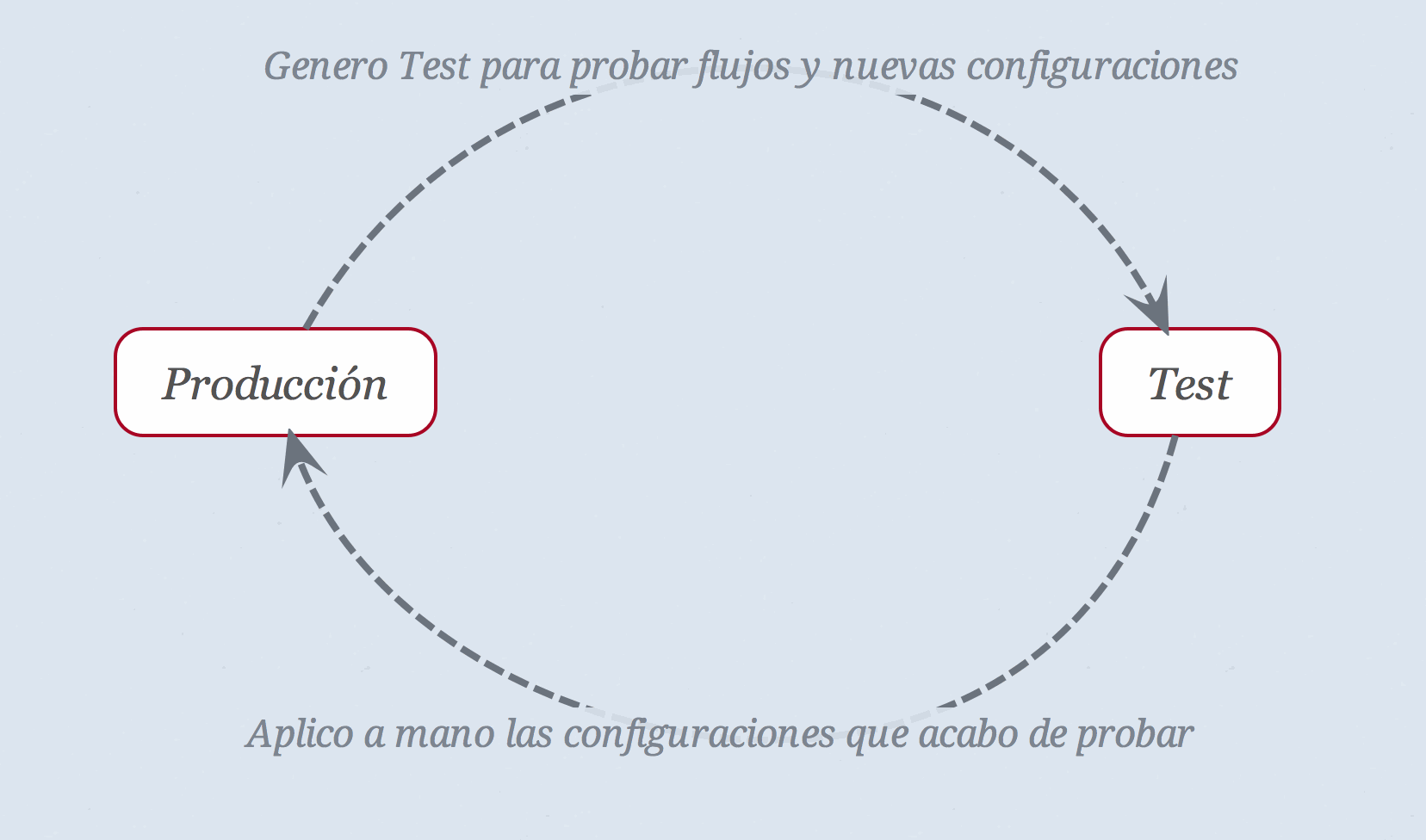 But now I want to test what is in Updates in Test, what do I do? You have two options:

f you are a developer and you came to this part of reading safe and sound, this is for you. The instance of Develop is the only one that a person with a developer profile manipulates, in the case that the project team is composed of a leader plus the developer (s).

Develop is the only one of the four deities that can be created at the discretion and is removed only if the developer wishes. In other words, the developer can create an instance that will be a copy of Production, Updates or Test even with Branch not yet approved for  Merge.

The instances of Develop are not suitable for the Project Leader to try something with the client. It is more for internal use and discussion among the project team.

In the end, the answer is simple: Your instance is in many places, but the criterion is in your head.

If you want to know more about our deployment platform, we can help you!